I have a couple of Christmas cards today.
The first is a non-traditional pink: 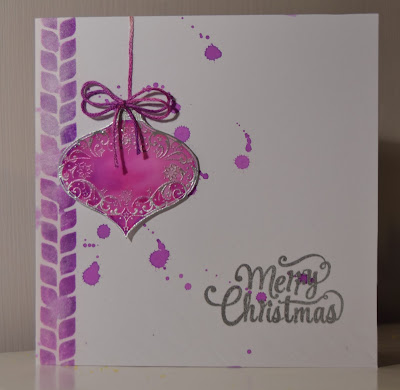 I am more comfortable with red and green but who can resist pink?
I embossed this bauble in silver and then coloured it with pink ink and water on an acrylic block. The I covered it in Glossy Accents and waited and waited for it to dry. I searched through my threads feeling sure I'd have the right pink but no. So I had the bright idea of colouring it with the ink. I just dipped it into the wet ink on the acrylic block and it dried much more quickly than the Glossy Accents. 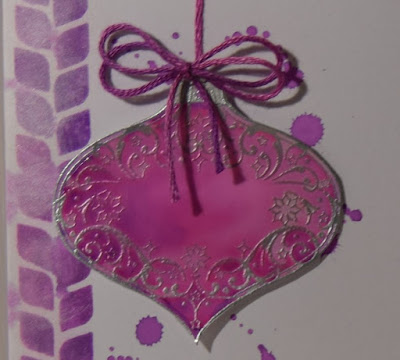 Then I bravely embossed the sentiment and then even more bravely added splatters!
I've never done this before, being sure that I'd ruin the card. (I did practise on another piece of paper first). I'm really pleased with the result.
The bauble and sentiment are stamps which came with stamping magazines. I was feeling rather low a couple of weeks ago and succumbed. I'd like to say they were better for me than chocolate but I probably bought that too!
The pattern up the side is a Stamplorations stamp.
I'd like to enter this into:
Merry Monday - shades of pink and grey or silver. 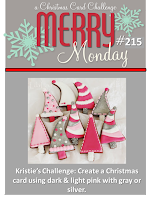 Rudolf Days September Challenge and
Stamploratons CAS challenge. I always forget to enter but this month the optional colour is Pink. 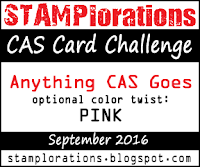 Here is another card which I am less keen on. 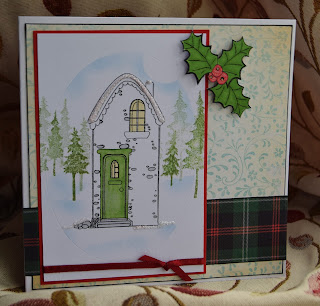 I used an oval mask and sponged the blue through it and then removed it to add the trees. Then I ran a ball tool round the edge to define it. (I may have done that first, I can't remember. That would probably make more sense).
I've used a bit of design paper which I've been hoarding for ages, which is not Christmassy but I don't think that matters,  and also a snippet of tartan which is only a snippet as I keep cutting the sheet but never actually using it! Also very old.
The holly is from the magazine set and the little house is Polka Doodles.
I'm linking this to 52CCT where the technique is Masking 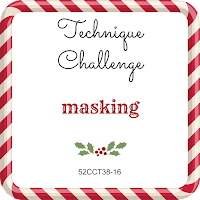 and I think I'll drop into the Snippets Playground as I've used lots of snippets and also old stash which is nearly as good.
I'm really not very good at layering, some people do it so beautifully. I'll have to do more observation!
Take care and have fun. x

I've made a quilt using a few snippets. 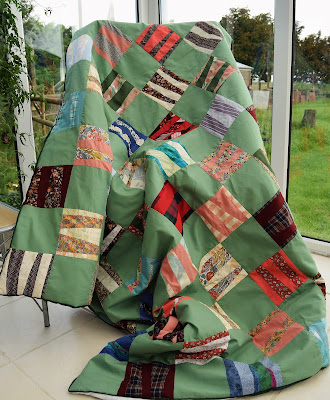 The story of my quilt - Before we move, a year and a half ago, I decided to use up many of my fabric scraps and make them into quilts rather than moving boxes and bags of bits. (Yes, I do have quite a lot). I did try. I tried to make 12x12 inch patchwork blocks using different quilting patterns but sticking to a few colours. Turned out I was REALLY bad at it. Each block turned out a different size and the seams and joins were rarely precise. I still don't know how I got the measuring so wrong even when following instructions
I take my hat off to anyone who can do that kind of patchwork. 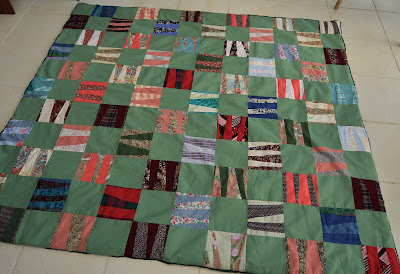 No quilts were made before I moved and I gave up on the blocks. Somehow it came to light that my youngest son felt neglected that I'd never made him a quilt. My daughter has two, a baby quilt and a single tumbling blocks one sewn by hand when I had more time and younger hands. (My older son doesn't have one and doesn't mind).
So of course I said I'd make one. Having had so much trouble with lines and joins, I decided not to use straight lines so all the scraps for the blocks are cut on diagonals. Each square is 6x6 inches. I did have to sew in the green squares and some of the joins leave much to be desired. I got better as I went along but don't peer too closely! Anyway he likes it and that is what matters. 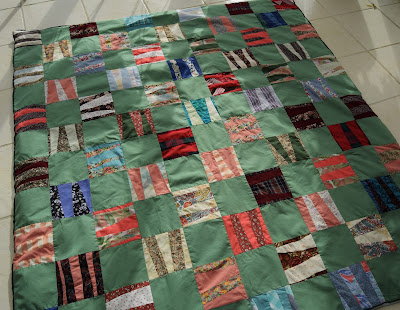 James chose the green and the random nature of the layout. 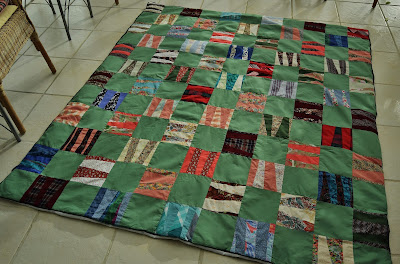 The actual blocks were not hard to make and sewing it all together wasn't too bad but the hardest thing was getting the backing on and finishing off the edges. They are by no means straight but no one is measuring.

So I'll be skipping into Pixie's Snippets Playground as all the coloured patches are snippets. Let's not mention all the green fabric, backing, wadding and edging I had to buy to finish it off!
I still have loads of scraps so will now have to make one for other son, so he doesn't feel left out and then a full size quilt for daughter. Maybe not this week though.
Happy crafting! x
Posted by AlisonC at 10:36 8 comments:

White with a touch of red

Hello lovely crafters.
In an attempt to regain some sort of crafty mojo, I've resorted to a card layout which I used to use often. Quite simple but always works. 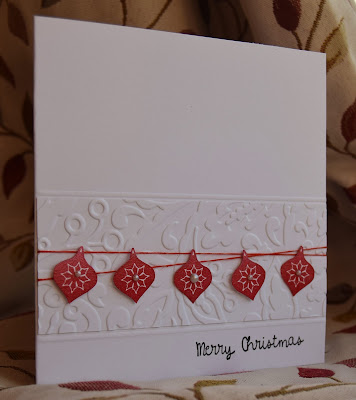 This was inspired by 52CCT: 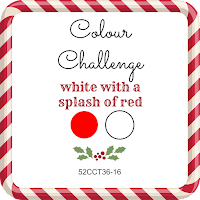 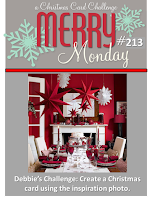 I chose the hanging decorations.
I can also hop over to Pixie's Snippets Playground as I've used a few snippets ~ card and thread.

Our weeks holiday was perfect, thank you for asking  :)
We had a few days out but also remodelled our kitchen. We have new worktops and have covered some wall tiles, which were not to our taste, with wood cladding. Then I painted the cupboard doors so it all looks very smart and chic.
There were certainly days when even making a piece of toast became a mental exercise but most things are back to normal now.
We still have woodwork and walls to paint but we completed phase 1, a new sink, about a year ago so we'll get round to it. I won't be able to spend so much time outside as Autumn draws in so I'll have to do decorating instead (or stamping).

I don't know what's wrong with me recently but I mostly can't seem to make a card I'm happy with. (Which is a shame as I've just bought a shed load of stuff).
I made these baubles last week for the watercolour challenge and even though I placed them every which way with half a dozen sentiments, nothing seemed to work and in the end I gave up.
This week the challenge for 52CCT is a sketch: 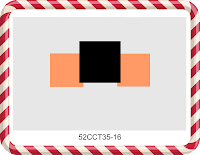 I stuck them down and here it is: 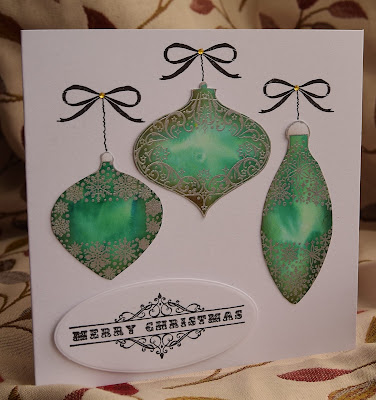 Obviously there was more fiddling about than that but we won't go into it. 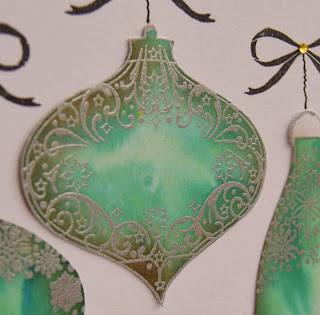 After promising myself that I wasn't going to buy any more craft stuff I bought two magazines last week and these baubles came with one of them.
I embossed them in silver then filled them in with a wet brush and added some green brusho powder and moved it about with the wet brush. It makes such pretty patterns.
As two of the baubles don't have much definition around the edge, I inked with a little Esperesso on a sponge.
I stamped the bows, drew on the lines (which are straight) and added the gems. The sentiment is from a Joy Crafts set.
I think I've been a bit distracted recently maybe that's why the inspiration isn't coming. Isn't it strange how sometimes you can make dozens of pretty cards and other times they all go in the bin?
I've got a week off now. We are doing some work to improve our kitchen which means nothing is where you think it should be just now. Hopefully by the end of the week there will be some development. Hoping for some days out too!

Challenges to play along with...